In the case of Geography, they help students to understand and review from the capitals and rivers of each country to their political systems or cultural customs. Each of these Best Apps to Learn Geography that you will see here will allow you to learn the world’s location and regions, the capitals, and the flags.

It poses different questions that must be answered correctly from three possible answers. 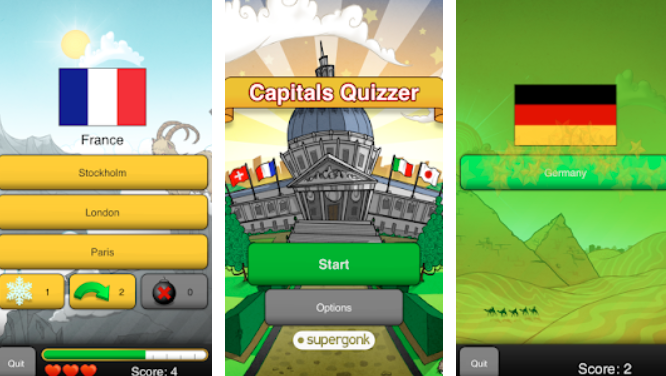 It is made up of several games: the first one gives the name of a country and three different capitals to guess, and in the other, the flag must be associated with the corresponding territory. It also offers the possibility of learning the currencies that are used around the world and knowing where certain important monuments are located.

StudyGe is an excellent app to learn geography. It is a game that always revolves around the planisphere and locating countries in it. In this way, it becomes an important tool to learn the location of countries and the capitals of the world and flags. 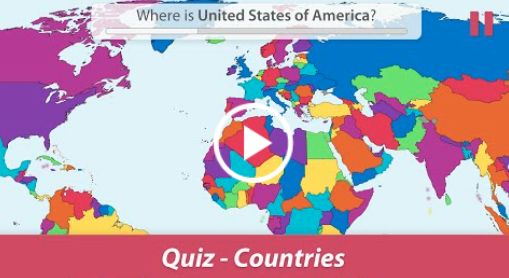 You have an additional option to explore the map. This comes in handy to study with ease.

It contains a world map with 214 countries, flags of each nation, and detailed information about each place: population, languages, form of government, and quizzes that function as a review test. It also allows you to explore which countries have a common border.

Also, it offers the possibility of changing the color of the theme, selecting which country some international territory disputes correspond to.

This app contains ads, and you can find it available for Android and iOS.

It is divided into categories according to the theme: culture, continent, countries (largest in the world, North Africa, the Middle East), federal states, and cities. 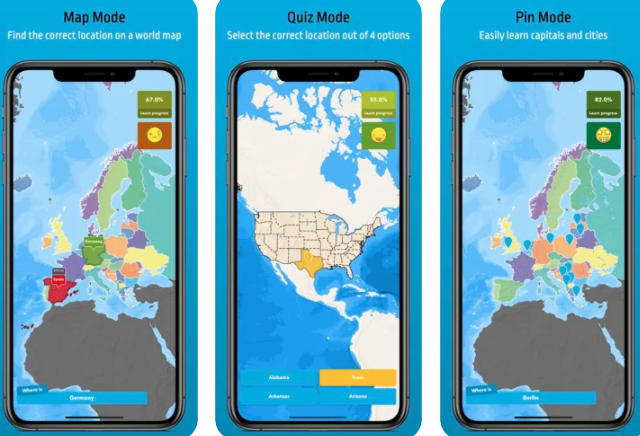 Also, it offers three types of maps according to relief, plain, or color; and three types of game (individual, multiplayer, questions, or select a point on the map).

4. Flags and Capitals of the World Quiz

The idea of ​​this app is that you can learn all the flags of the world. It consists of Trivia, where we have different game modes.

In the most common, they teach you the name of a country, and you must answer which country it belongs to, among four possibilities. The most interesting thing about this is that the options are not easy. They put you flags that are very similar to the country in question. 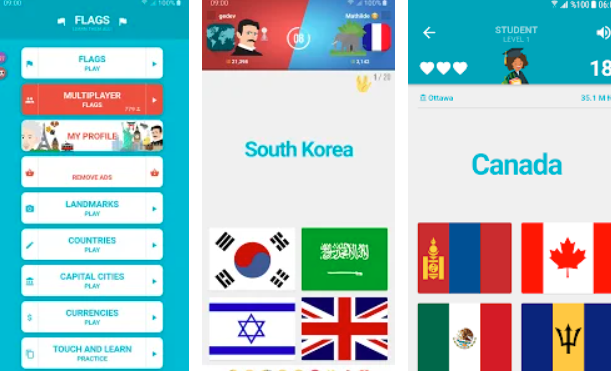 There is also the alternative mode, in which they show you the flag, and you have to choose the name of the country.

But there are also other game modes. One of them is to learn about famous places in the world’s countries, playing a trivia game again in which they show you the name of a famous place, and you have to select the corresponding photo.

Also, there is a way to learn capitals and flags at the same time and one more to learn the local currencies.

You will have to unlock levels to advance with the most difficult countries and flags for each of these games.

Like Trivia, it has four different levels to test knowledge. Attach a political map and another physical one where it is possible to locate each country, rivers, mountains, gulfs, deserts. 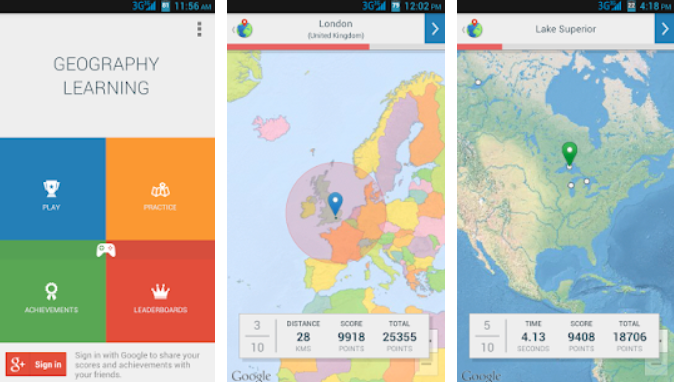 While it is necessary to locate 10 randomly chosen geographical points in the game mode, a practice mode allows selecting learning methods, such as learning geographical points, capitals, or exploring the map and their locations. It is exclusive to Android. 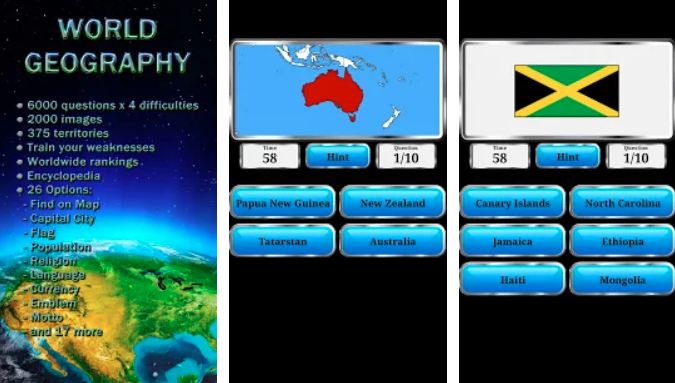 In turn, it provides the player with games with up to 6,000 questions combined with images and four different levels of difficulty: countries, islands, regions, world ranking are some of the options they offer.

Among the games it includes are: guessing capitals and flags, knowing how to place countries and territories, and locating rivers and mountains. 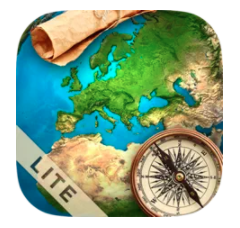 It also has a study with information on the area, population, or density of each place globally. There are other versions of the app focused on specific countries such as Spain, Russia, the United States, or Mexico. It is available for iOS and Android devices.

8. Cities of the World Photo-Quiz – Guess the City

It consists of guessing which city it is just by looking at the photograph attached to the app. 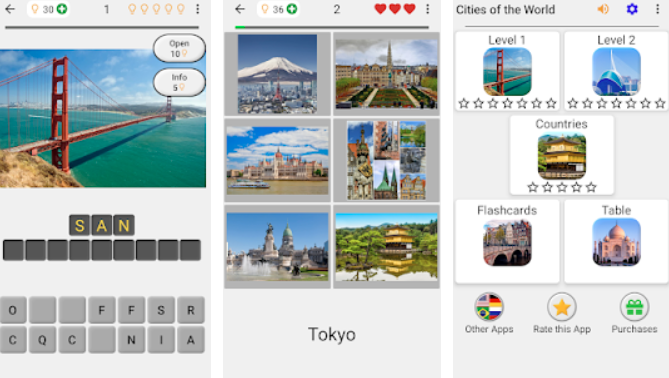 It has three levels: cities 1, the easiest, such as San Francisco, Milan or Shanghai; 2 cities, high level, with Hiroshima, Gran Canaria; and, finally, countries that are based on locating a city in the corresponding territory. It is exclusive for Android devices.

It allows you to explore the whole world thanks to the 3D satellite images that are collected in the app. 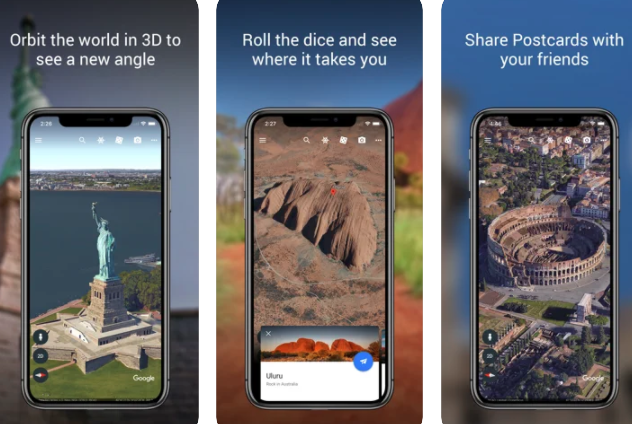 Seeing the Statue of Liberty, the Sagrada Familia, or the Eiffel Tower is possible with the 360º perspective offered by the Street View. Also, it includes a collection of guided tours from NASA, National Geographic, and the BBC, among others. Available on iOS and Android.

Seterra is a geography learning product that dates back to pre-internet times. Converted into an app, here we have one of the oldest educational programs I can remember. 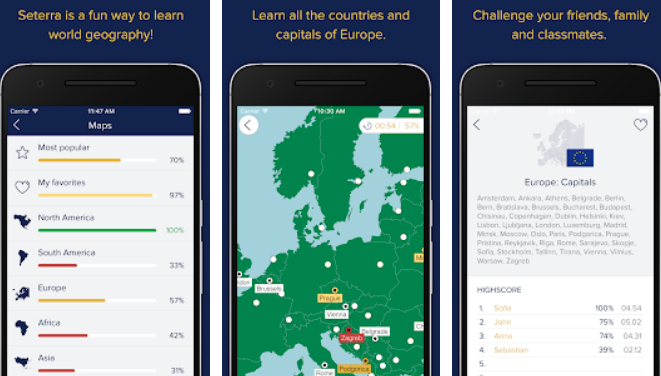 To advance to the level, the student will have to discover which are the largest mountains in the world; look for the islands scattered all over the planet; associate the flags with their respective countries; locate seas, rivers, and oceans and choose more than 20 challenges. It is available in five languages ​​and gives the option to play offline, create a list with custom questions and ask for clues.

The best thing about Seterra is that it has different regions set up to study. And in addition to flags and regions, you can learn about cities, rivers, mountains, among other aspects.

This is a different geography app because it is not based on locating territories on a map or selecting the correct flag. Here the idea is to answer geography questions of all kinds. 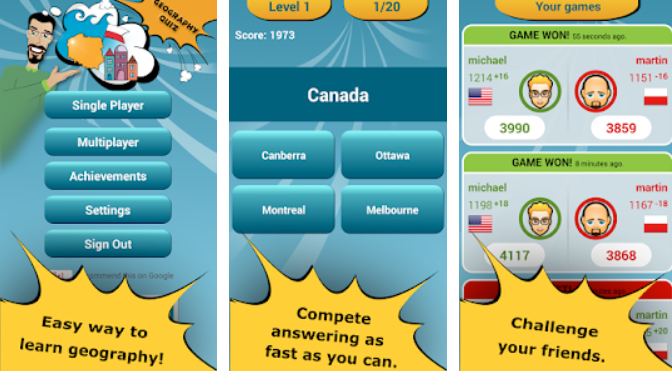 Questions may appear about the continents, about countries, or about the planet Earth itself, in relation to the solar system.

Images usually accompany the questions, and the answer can be multiple choice or through letters that must be discovered.

Geography Quiz is available on both Android and iOS. The only disadvantage is that it has a lot of publicity and in some moments this becomes very annoying.

With a pixel-based graphical interface, Geography Plus stands out as a retro educational app. It uses a graphic style that recalls the old console games and takes advantage of the typical sounds of those little machines.

With Geography Plus, you have two trivia modes: play and learn. With the first, you will face all kinds of questions, and you will compete globally with other users who use the app.

That can be fun and motivating, but I find the Learn mode much more educational. There it is possible to select the number of questions per round, the region to learn, and the topics, among which the following can be selected: capitals, flags, continents, map, currency, and area/population.

Geography Plus on Android. Contains advertisements.

This app does not shine for being one of the best, but it has a particularity that makes it stand out. It incorporates trivia for country shields, something that, in general, other Best Apps to Learn Geography do not have. 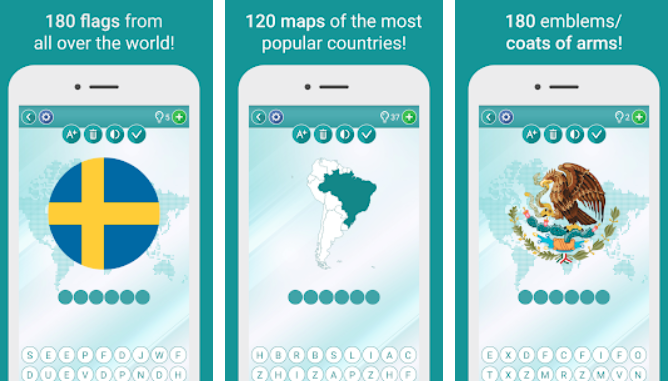 The downside is that to access this Trivia, you first have to unlock it by playing the levels corresponding to flags and then countries. With 159 correct answers between the two, you will be able to access the shield trivia.

In addition to learning Geography, it gives the possibility of practicing the subject in English. 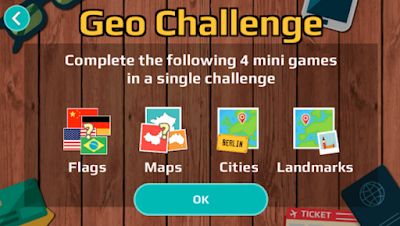 This is a trivia game, trivial style, about world geography and its variants. It has graphics, animations, and four questionnaires (each lasting 1 minute) to test knowledge in flags, borders of each country, most important cities, popular places, and famous monuments for Android and iOS.