The Best AR Apps for iPhone: With the release of iOS 11, Apple smartphones and tablets have learned to work with augmented reality. The list of the best Augmented Reality apps for iphone. ARKit-supported devices are quite large *, but the iPhone 8 and iPhone X are best suited for this. If all other gadgets were adapted after the release, new smartphones were originally created for full AR immersion. In today’s collection, we have listed 11 interesting Best AR Apps for iPhone that clearly prove that augmented reality is very cool and promising.

The Best AR Apps for iPhone

First, a few words about what augmented reality is. Suddenly someone has forgotten or does not know yet. The term is rather deep, but when applied to smartphones and tablets, everything is simple. Using the built-in camera, the gadget “sees” the surrounding space as it is and shows it on display.

Simultaneously, the programs, thanks to the device’s productive stuffing, analyze the whole thing and impose a layer of virtual objects on top in real-time.

Let’s start with the most beautiful AR app for the iPhone. So beautiful that Apple showed it off as a demo of ARKit at the iPhone 8 and iPhone X launch. It’s the multiplayer real-time strategy game The Machines.

We find an ordinary table, point the iPhone camera at it, and the device quickly generates a cool post-apocalyptic location on the surface – with rocks, sand, burning buildings, and, for example, a destroyed highway. This is a battlefield around which you can move and look into literally every corner of it just by bringing your smartphone close to the table in the right place.

Further, it remains only to place merciless combat robots on the map and send them to destroy the enemy base. Or a squad of other robots controlled by your friend from his iPhone. Yes, there is also a multiplayer mode. Such is the board game of the future.

If an entire universe can be created from scratch right on the table, why not use AR to transform the usual mobile entertainment? Easy! To play Kings of Pool, you don’t even need any flat surfaces – the program is able to draw a virtual pool table right in the middle of your room.

As a result, the gameplay cannot be compared to boring 2D billiards. If there on the field, you can only look from above, then now the player is free to move around the table as well as around the present, and observe it from any angle and angle. Plus 100,500 to the realism of what is happening.

We continue the sports theme. Do you like to throw the ball into the ring, but you have neither one nor the other at hand? It doesn’t matter – AR Sports Basketball will draw them for you in the park or in the garage. 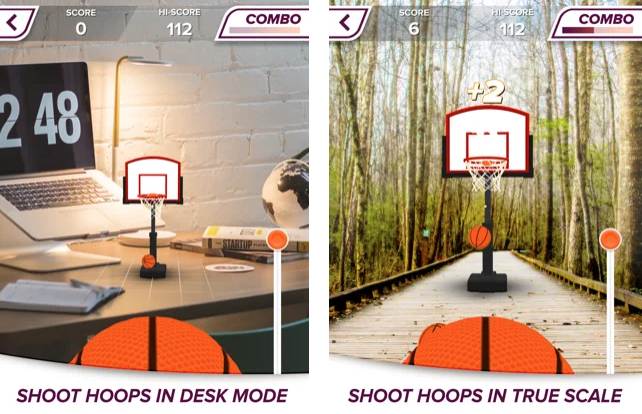 Everything is elementary: we aim with the sight and adjust the throw’s force with a special slider. After each hit, the basket is automatically lowered or raised by a random amount. Well, so that life does not seem like honey. Of course, you can move around the virtual basket or rotate it right in the virtual space if you are suddenly too lazy to walk.

Even simple platform games can be drastically changed with augmented reality. In Flat Pack, developers have combined three-dimensional shapes with 2D elements.

As a result, we have a world consisting of large cubes, on each face of which you can move the hero. Along the way, you need to dodge shots, do not touch sharp spikes, do not let yourself be crushed by huge moving contraptions, and fight dangerous bosses.

AR entertainment can be quite peaceful. Surely many of you have seen games in the app stores in the spirit of the good old Tamagotchi: we start a little animal in the phone, feed it, play with it, stroke it, slide your fingers across the screen, etc. Virtual reality can change them too!

AR Dragon is a vivid confirmation of this. All principles are absolutely the same, but with the amendment that the virtual dragon is now truly three-dimensional and runs right around your room. The massive offensive of three-dimensional cats, dogs, and other cute animals on the AR section of the App Store is just a matter of time.

Completing the game part of today’s collection is another strategy in augmented reality – the current bearded guys who enthusiastically played “dances” on the carpet in childhood will especially appreciate it.

The program creates a huge battlefield right in the middle of the room: it has your base and tanks and helicopters attacking it, which you need to shoot as if controlling a space combat drone mercilessly—simple, straightforward, and fun.

We are slowly moving from entertainment to useful software. The first such program is called Ink Hunter. It was made for those who are preparing to apply a tattoo on their body but are still afraid to do it because they do not know how it will look. Augmented reality is in a hurry to help! 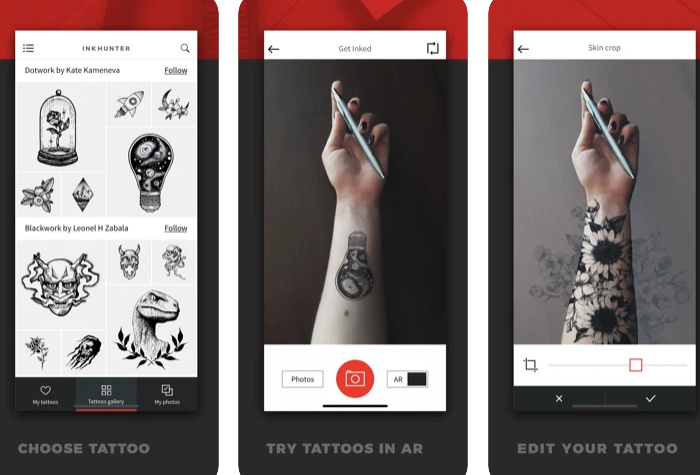 Step one: draw a square “smiley” on the hand. Step two: load the sketch of the future tattoo into the smartphone’s memory. Step three: we aim the camera at the already applied mark, and the software immediately changes it to a drawing. The hardest part in the end – now you need to decide on a trip to the tattoo parlor finally, and no augmented reality will help with this.

A simple but sometimes very useful program that replaces the ruler. And that, in general, says it all. 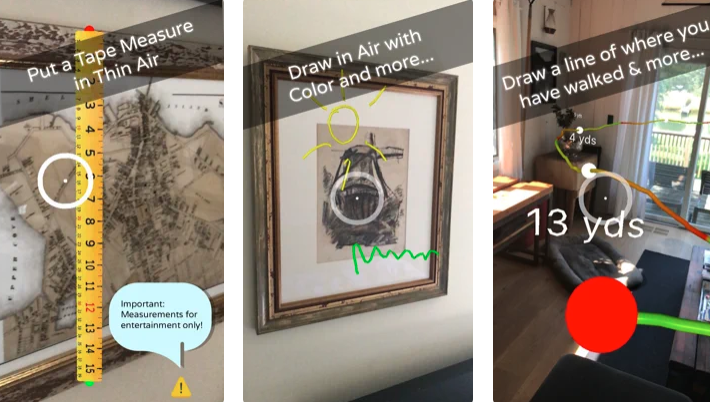 Just select the starting point, carefully guide the camera to the finish point, and WaveLenght immediately shows the result in centimeters. A must-have for those who make repairs and regularly visit furniture and construction stores.

Previously, to create a floor plan, you had to call a professional measurer or run around the apartment yourself with a tape measure. And then either draw a drawing on paper or do it in special programs on a computer. 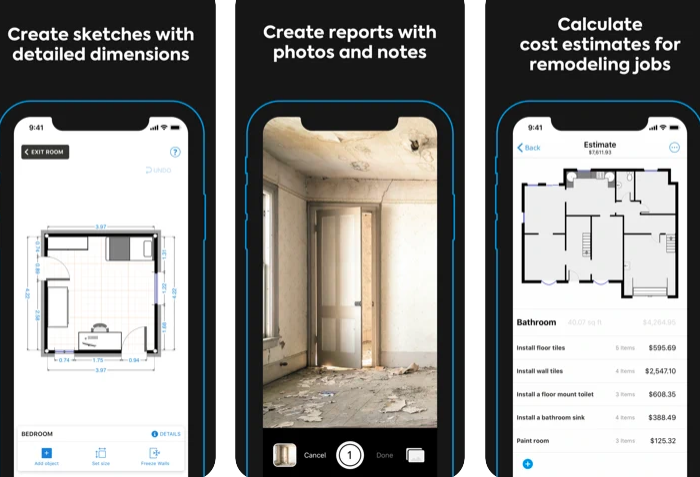 All the same, can be done using the iPhone and augmented reality, and even pieces of furniture do not need to be moved. As with WaveLength, the user chooses the start and endpoint of the measurement for each protrusion in the room. And the program automatically generates the electronic version of the plan of an apartment or room.

Augmented reality will help novice artists too. Down with carbon copies and light boards! You can train in creating your own drawings based on ready-made ones using the Sketch AR program. 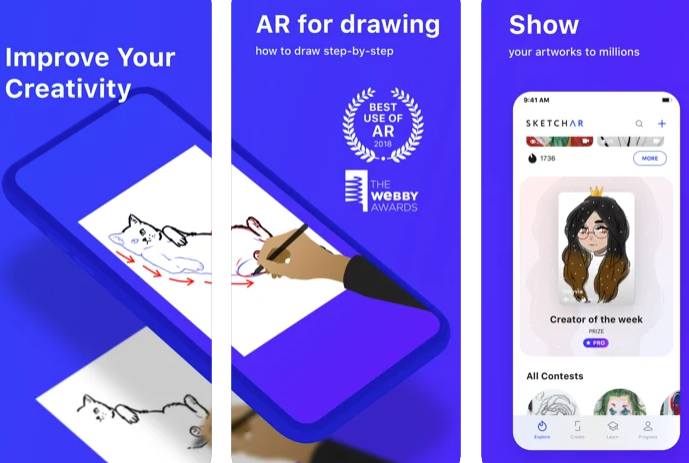 First, you need to photograph the image that you want to reproduce and then point the camera at a white sheet, along the perimeter of which circular marks are drawn with a pencil. Then it’s a matter of technique – to circle the picture along the lines and add something of your own to it.

The agonizing thinking about how a new piece of furniture will look in the finished interior seems to be coming to an end too. The IKEA Place program was created for just such a virtual “fitting.” 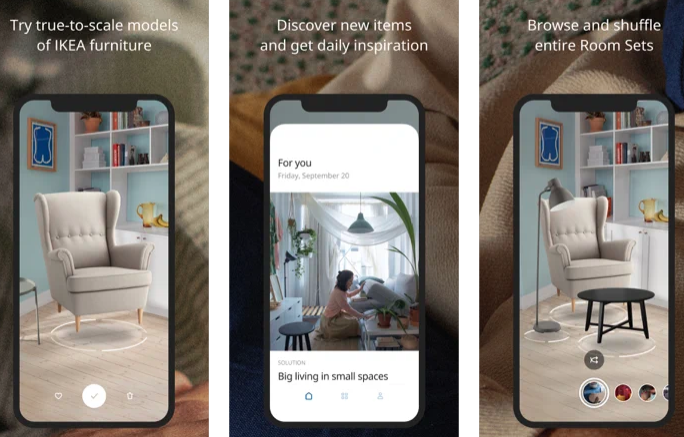 It determines the room’s real dimensions and, based on this data, displays the items from the catalog of the legendary store in the most accurate size possible, so you won’t be mistaken.

The technology is not new, but Apple was able to make it popular with developers and thus offer users really interesting use cases. Dinosaurs walking around the yard and animated emoticons hanging in the air that can be seen through the iPhone screen are just the tips of the iceberg. By the way, we deliberately did not include these very dinosaurs with emoticons in the collection, concentrating on truly exciting and sometimes even useful AR programs.