Top best meme generator apps for android and iPhone ios: Memes: you either love them, or you hate them. And if you love them, you are probably obsessed with them, to the point that you end up seeing memes in all everyday situations. Don’t be shy. Use the following apps to easily create your own memes.

Seeing memes is only the first step; a true meme lord needs to master all the tools at his fingertips to sharpen any subject. Here we have selected the best of the best when it comes to creating Android memes. Finding the Best Meme Generator Apps to make memes can be difficult. There are many, yes, but most are pretty bad. Memes are incredible, useful, and hilarious that we see more and more regularly, which means that you must have a good meme generator app to keep up to date and be able to develop those occurrences and even that troll in you. So, take a look and choose the best meme maker app on Android!

What is the best application to create memes?

Keep in mind that many of these meme apps appear and disappear constantly. However, the ones listed below should be around for a long time!

It is one of the oldest Best Meme Generator Apps, with a huge database of 700 images. Time has not passed in vain for Meme Generator, and its app has been renewed with a more current interface (the old one is still here). It supports editing in a multitude of formats, with enough editing options that it rarely falls short. 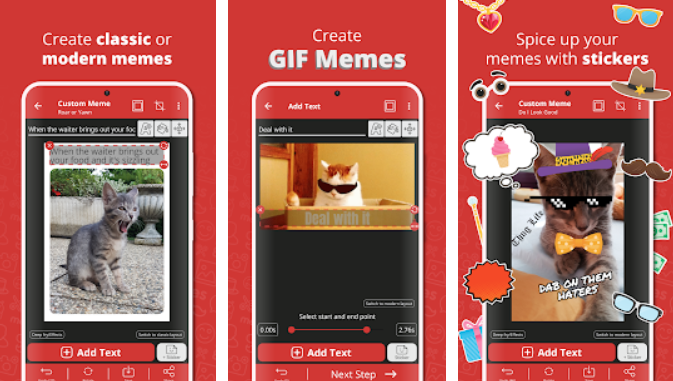 Something that stands out is the ability to create photo collages. Also, if you’re a little green on creating memes, you can tap on Example to see each meme in action and use it correctly.

In approach, Meme Creator is almost the same as Meme Generator (in this case, with a database of 600 images), although it is a bit more outdated in terms of design. It is perhaps more suitable for those looking for something simpler. 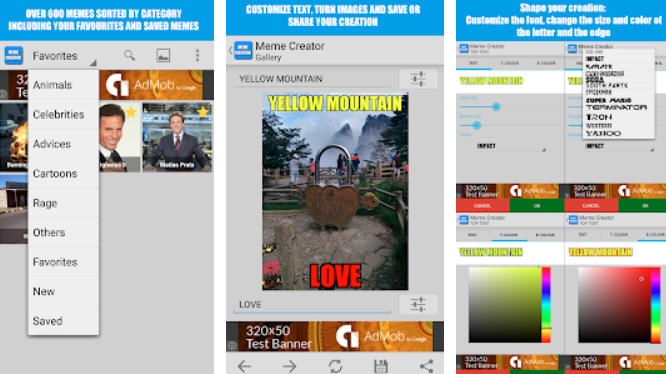 The images are classified by categories (drawings, celebrities, tips, animals, rage). It does not have as many advanced functions as Meme Generator, but at least it allows you to join memes, vertically or horizontally, easily.

Video and GIF memes allow you to make animated creations. It allows you to cut videos or gifs to use only the fragment that interests you in the creation of the meme. 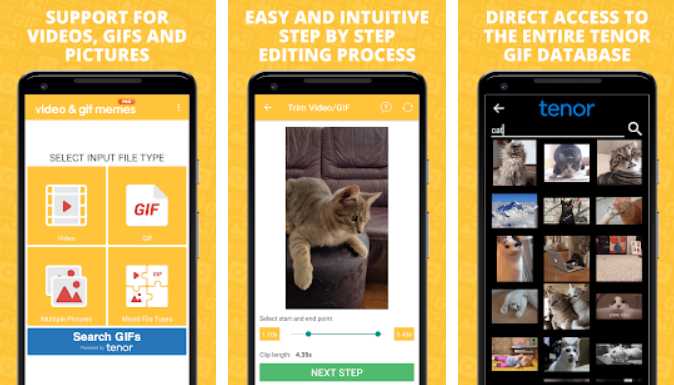 It is integrated with the GIF Tenor Finder, which allows you to search for millions of GIFs that can then be edited and shared. It is possible to add phrases to your creations, adjusting the size and color of the letter.

Creating memes is excellent, but what if you could also see them from the same Meme Generator App? It’s possible with Memasik, which includes its own gallery of memes with user creations. They have not made me very funny, everything is said, but there is nothing written about taste. 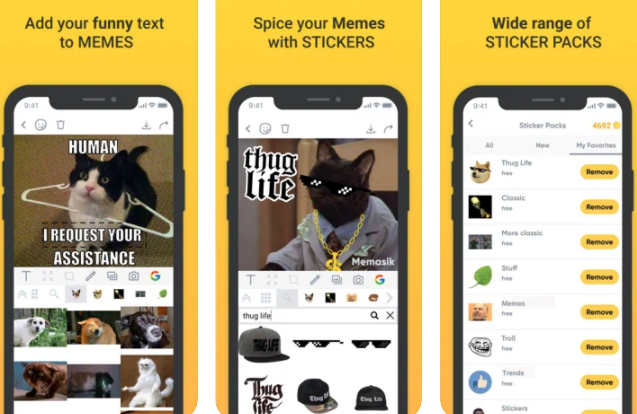 As a meme editor, it is a little different from the previous ones since it does not start from a popular meme template, but you must use your own photos or drawings and then apply texts or stickers on top.

Memetic has a curious way of creating memes with a step-by-step wizard that can be quick and easy. In return, you cannot generate more complex creations as for example, in Meme Generator. 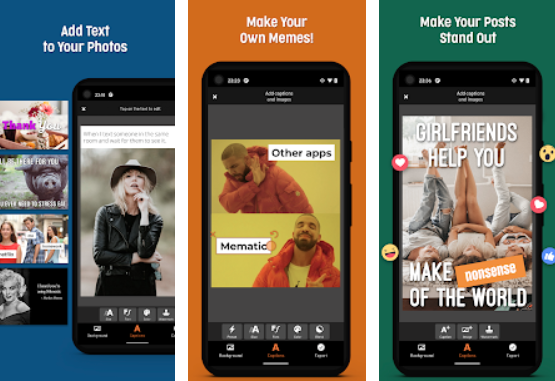 It features a series of popular memes, which you can customize by choosing from three different styles: with text above and below, such as a “demotivational poster” or with a single text at the top.

It’s called Modern Meme Maker and, well, it’s true that the interface is somewhat more up-to-date than in other Best Meme Generator Apps to create memes. A positive fact is that each meme has its name, and you can use the search engine to find a specific one quickly. 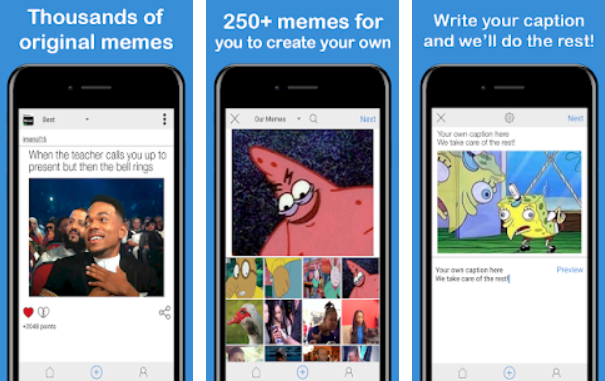 As for the edition itself is a bit limited since it only allows you to add a text in the upper part of the meme, without major options to control its appearance or position. Anyway, for a quick meme, okay.

We do not know if the title of “Pro” is exactly won, but the truth is that it is quite complete. With a lot of images ready to use, you can modify them by adding text on photos, stickers, emojis, and drawings to your liking. 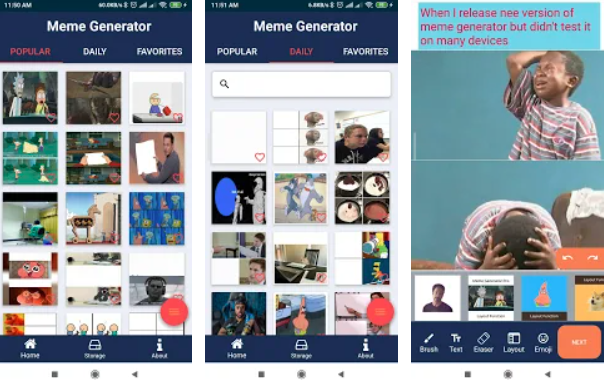 Although the images are not ready-made templates like in Meme Generator, at least it has a button to add other images within your creation that can give a lot of play. What you cannot do is chain images.

Enough with the images. What about the video memes? Ok, this type of creation requires a lot more effort than adding text to an image, but not with Ditty, an app that basically makes the video alone. 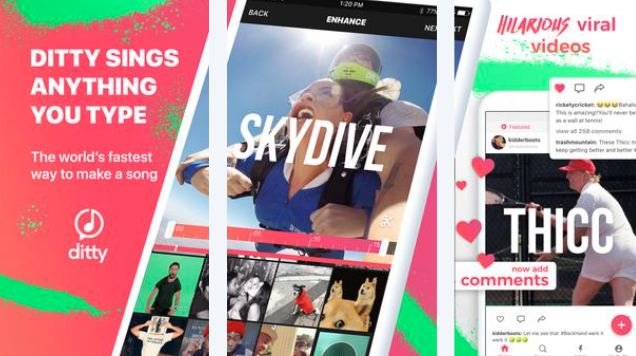 In this case, it is about music videos generated from the lyrics that you put in it. Images with animated GIFs accompany these videos, and the result can be hilarious without having to do more than a couple of clicks. 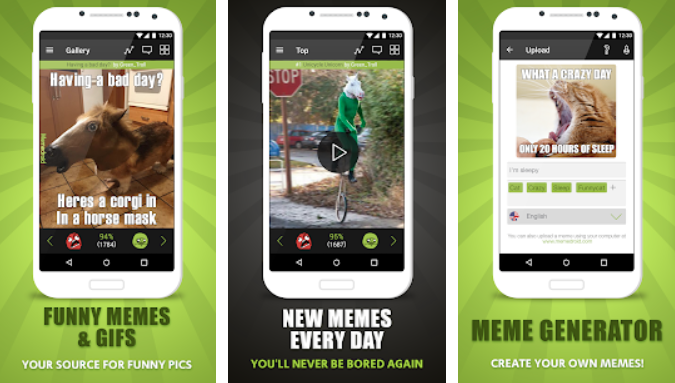 It has a large database. In addition to the wide variety of memes that it has in its database, it allows you to make your own creations using the platform’s templates or by editing your photos.

We cannot forget TikTok, heir to Musically. Although not all TikTok are memes, the app gives you tools to create authentic works of art with the help of your mobile camera. 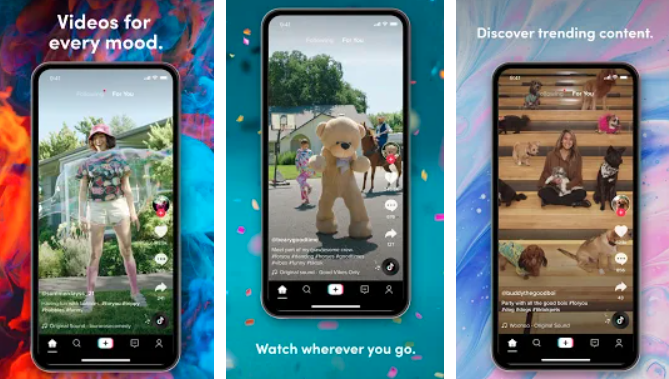 In the absence of Vine, it is the place where short videos meet today. Of course, creating a video that becomes a meme is not going to be easy, and that is where your creativity comes in and how you take advantage of the 15 seconds that each video lasts.

From the same creators as the legendary Meme Generator, Video & GIF Memes focuses on animated GIFs (although you can also start from a video or a collection of images). The best part is that it integrates with Tenor’s GIF finder, so it’s easy to find an interesting GIF to edit. 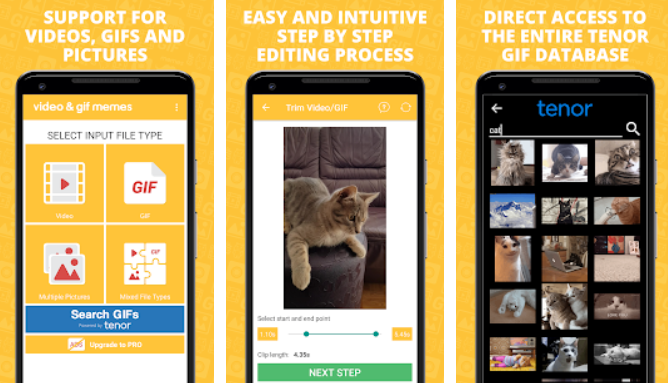 As a GIF editor, it is quite powerful. You can choose the start and endpoint, as well as add texts on top. The final result is saved as an animated GIF or video, ready for sharing in other Best Meme Generator Apps.

Morphin is a slightly different idea from the previous ones. It is also based on animated GIFs, but in this case, the idea is that you star in animated GIFs. This is the future that we have been promised.

Technically, they are not the original animated GIFs, but a 3D recreation of them, but the result is very attractive, putting your image in classic animated GIFs of yesterday and today and thus creating unique and personal memes.

They seemed like a passing fad, but they are here to stay. The memes. It is about those photos accompanied by a text generally in capital letters and white letters that, well combined, can be very funny. From the most popular ones, with those of Julio Iglesias and his tagline ‘and you know it …’ at the head, to those who make the funny one in your WhatsApp group with their own photos.

The day bizarre news comes out, you hardly have to wait to start seeing these montages on social networks. But how are they made? Today we are going to make one from the computer.